There are big issues facing our retail High Street. Yet they are not as simple and as straightforward as our much beloved media would have us believe. Should the list of retailers facing closure include the likes of Next, Tesco, John Lewis, as opposed to the likes of Toys r Us and Maplins then there would be greater cause for concern. There is no doubt that even the former are facing tough challenges, loads of people still shop there, spend loads of dough and they make profits.

One of my customers who has outlets in Meadowhall, Sheffield, White Rose, Leeds and the Metro Centre, Gateshead, was recently told by Centre management that there had been a drop in flow of approximately 15%. This could, of course, mean either a drop in the number of visitors or a reduction in the frequency of repeat visits. The biggest fall has been the fall in the number visiting during the evenings. Something that is of much greater relevance to shopping centres as opposed to High Streets. I suspect that among the many possible causes for this drop , this suggests is that the idea of spending an evening wandering around a shopping centre is losing its allure.

I have long been under the impression, for such a small geographical country, that we have long been over represented by retail outlets . There are close to 290,000 retail outlets within the U.K, which equates to one retail outlet for every two hundred people, and there are approximately 2.8 million(nearly 10% of employment) employed within the sector. A crude measurement yet nevertheless gives some form of perspective . As does retail spending which is approximately £360 billion , or nearly twice the spend on healthcare. Even with the present retail closures retail spending since January 2017 has not actually dropped. This chart does include fuel but the only month where there was zero growth was October. 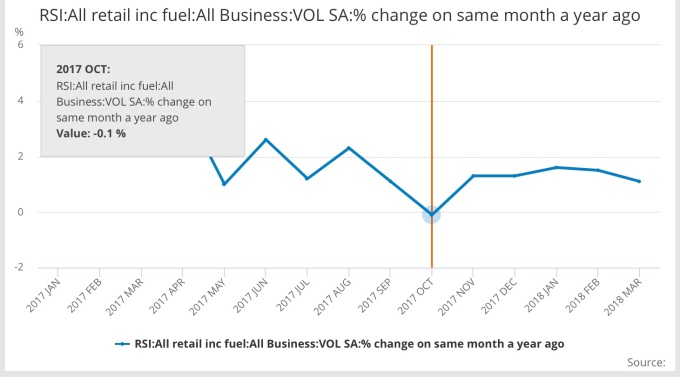 For too many years many of the multiples sought growth through store openings, as opposed to innovation, better offerings and improved experiences. Independents have suffered because of multiples, poor local planning, and lack of investment. Both are suffering from a drop in footfall and lower basket values increasing the cost to serve and reducing margin.

Without wanting to repeat previous posts and stating the blinding obvious, online has had a huge impact but it is not the whole story. Waterstones , the booksellers, one of the first retailer to feel the impact of the likes of Amazon , was on the verge of closure in 2011. Yet they have just posted healthy profits.

The latest twist is the planned merger of Sainsbury’s & Asda. Initially, This was a real surprise but after a bit of thought , it made a lot of sense. There has been some slightly daft comments from some parts of the media about taking on the likes of Tesco, as if they haven’t had their own travails. With Sainsbury’s Argos operations it is much more of an opportunity to expand this in Asda and compete in the future with the likes of Amazon , who are becoming increasingly interested in bricks and mortar stores and food. So much so that it now transpired that at the back end of 2017 that they (Amazon) approached the board of John Lewis with a view to buying Waitrose ! According to the JL board they flatly refused any talks. Whatever was said the signs are there.

High Street retailing is undergoing a massive transformation there are undoubtedly going to be winners and losers. Those at the top rarely loose, those at the bottom ie employees, invariably do. As to what happens will depend upon two components . The entrepreneurial retailer and the consumer. There are retailers,who are creating new and exciting retail outlets , but the U.K. total will continue to decline . That is a given. The other component is the consumer. If the consumer wants to continue to ‘go shopping’ as opposed to ‘surfing for their shopping’, they will have to keep shopping a lot….and stop bemoaning the closure of their local retailer which they like being on there on their High Street , but never go in. Retailers have to attract and consumers be attracted.