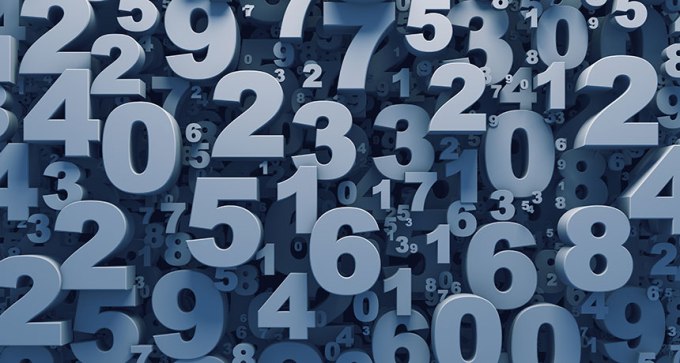 All of us were taught at an early (some may not have listened ) that 2+2=4, 3+3=6….and that these were irrefutable facts . In other words, numbers do not lie. Or rather, as very young children that is how we interpreted these, apparently, simple sums . Whereas, most of us were told not to speak to strangers, even if they smiled, as a smile did not always = ‘Good’.

The number bit was a lot more easily absorbed . So as we grew up , it was in the security that if we were given ‘numbers’ it equated to a fact. What we should have been told is be very aware of numbers given by smiley people.

I, suddenly, became aware of this whilst talking with a friend about his chosen PhD subject ..the study of ‘numerical quadrature and cubature processes‘. Yeah, well, what is that you ask, which I did , ask that is. It is something to do with the measurements beneath a curve. He, then, proceeded, to show me his leather-bound copy of his 250+ page thesis, an image of which is below… 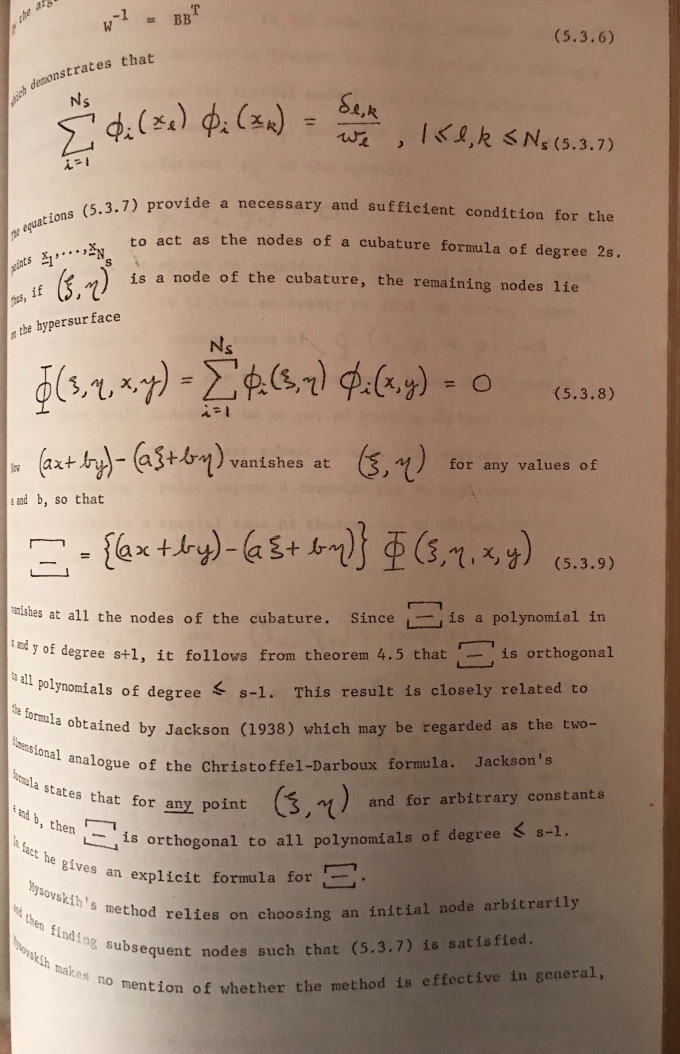 It occurred to me (well something had to) that perhaps numbers aren’t always the ‘absolute’ facts we believe them to be. If it takes two hundred and fifty pages to prove (and I don’t know if it did. No, I didn’t ask ‘cos I wouldn’t have understood the answer) what numerically happens under a curve , probably somebody has written another two hundred + , showing something different.

How does this have any impact on the way we go about our everyday life, working. or otherwise? Apart from, of course, maybe knowing what’s going on with the numbers in our curves beneath our umbrellas (they have a curve underneath them).

Fiction: 50% off what ? I have spent much of my working life being asked

What is my discount?

My answer was frequently along the lines (in the last five years, it has been less of an issue….)

It can be anything you want it to be …..surely you would like to know what the real  cost is? I can double the real price and give you 50% off ,or leave it as it is and you get 0%

But what is my discount?

Retailers constantly bombard consumers with 50% off!, up to 70% off …. leaving the consumer completely confused as to what the percentage really means, being uncertain as to what real price should be.

The number 1. Generally, considered quite a lowly figure particularly when used on its own eg 1p. To the vast majority 1p on its own (1 cent for those more acquainted with Euros) is pretty humble and of little value.

Up until about three years ago there was a discount store chain called 99p stores. As they started to grow that 1p became very critical . On reaching £100 million turnover! The CEO, obviously , stated the store name cost them £10 million a year.

1p increase in income tax raises approximately £5 billion in additional revenue . This is a perfect example of confusion and why I use the word ‘approximately ‘, as the figure varies by as much 25% depending on where the information comes from.

Here is one final number 1 example. One second is what us  mere mortals consider the lowest unit of everyday time. £5k would be considered a tiny amount in terms of the National Debt. Stick them together ie £5k every one second is how much the National increases. Suddenly both become a huge number. Or so I believe from one website National debt clock. I really don’t if this true ‘cos I can’t work it out.

Graphics…oft used by business ,politicians  and the media alike to completely change the perception of the same set of data.

These two graphs show exactly the same data. The difference is that the one on the left does not start from Zero. Numbers the same, but the perception is totally different.

You just gotta love this one 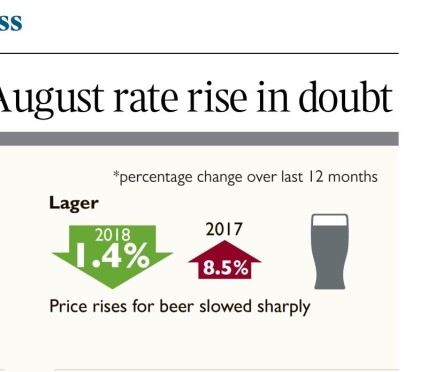 This was from the Times newspaper last week, illustrating influences on inflation. As it clearly describes the slowing in increases of the price of beer. All numbers are accurate and true . Yet they show the price of Beer in 2017 rising but the price of lager dropping in 2018. Lager did drop but Beer in 2018 has actually increased by 3.9%. Not earth shattering but intentionally misleading. And why is that green arrow so much bigger than the red one, when the actual percentage is 600% smaller .

What I am trying to say is that it all adds up (dropped that in nicely, albeit pure chance) to the way numbers are presented and the way we perceive them. Numbers , themselves, do not lie but the context in which they  are given will suit the ‘Giver’ be it politician, journalist, advertiser ,media or just the person standing next to you in a bar. Your job is to work out if they relate to your context. Unfortunately, many of us don’t have the time or wherewithal to do that and more often than not the ‘Givers’ know that.

Finally, when you next have to consider a number, whatever it be price, percentage, fraction, quantity, or any other format, consider the its context and the type of smile of its source.

East London, the home of notorious gangsters, England football captains (Beckham & Kane) Boy bands (East17), The Olympic Stadium and Europe’s largest urban wetlands , now includes two step brothers who are  creating (at least I think) one of the most innovative Independant Retail models in the U.K.

The main Walthamstow store combines everyday convenience products with Eat17’s bakery, patisserie, restaurant and locally produced ready meals. The Bishop’s Stortford site includes a street food market where space is rented out to third parties. It includes a fishmonger and a florist with a barber and a tattooist to come for those who crave something different with their pint of milk. The Hackney site has a working Art Deco cinema and a trade kitchen.

They currently have four stores with another two planned for 2018. No two shops are alike. Yet they have not completely thrown the ‘ baby out’ with the bath water as they are members of the Spar buying Group.I have only been into one of their stores (Walthamstow) and suggest it is unlike any other Spar you will have been in.

We have also eaten in the restaurant , by no means easy, because of its popularity.

They have created a retail concept that is unique, in the purest meaning of the word. It would be very hard, if not impossible for a large chain to replicate. They are the first to admit it has not been easy getting there and they believe ten stores are their maximum.

Not satisfied with all that it is involved with such a complex project they have created an additional revenue stream. Some of the products for sale in the shop are their own creations which they are selling to other retailers (e.g ‘Eat17 Bacon Jam’ which is sold in Waitrose) providing an alternative income stream and reinforcing their brand.

All this has be done since 2006, when they opened their first store. Furthermore , they have done this during the worst financial crisis in modern history and the during the most turbulent retail environment within the last forty years, yet with very little retail experience of their own.

I believe they have developed a retail concept which is

None of this has been achieved by sacrificing margin. They don’t compete with discounters and make no pretence to do so.

It is not a panacea of all retail ills. But it is a bloody good footprint for good independents in all sectors to look and examine how it could be translated to work in their own markets.

Eat17 are not alone. The Ginger Pig butcher shop chain ( eight I think) , the brainchild of a farmer and near bankrupt proper developer (Yorkshireman this time), again with no retail experience. Yet have developed, expanded and succeeded within the same turbulent times. There will be others, but what I find interesting and I believe significant is that neither of these two models were created by those who had any experience within the traditional retail market. I am not suggesting that the only future for independent retailers is for those who do not have any retail experience. But I do firmly believe that an independent retailer will only have a successful future if they look beyond the traditional model.

Walthamstow Dogs image at the top , sadly (not quite sure why I say that . I have been about half a dozen times and won sod all, so I am not that sad) only the facade exists , behind which is a housing development. The owners – the Chandler Family (of Walthamstow Dogs) sold up some time ago. One of the family members is Victor Chandler who created one of the first online betting operations ‘BetVictor’ so another East end boy ‘done’ good.