Bad is not Good. Not because it is pretty obvious, but I have posted a lot recently about what is bad in retailing. A little balance is good , ‘cos sometimes you need to say what is ‘good’ just to re-emphasise the bad. I haven’t yet written anything about Ugly.

Whilst it’s not always helpful to mention names when talking about ‘bad retailers’ , I think it’s really important to use names when they are ‘good’. 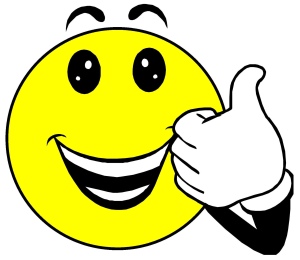 This is an independent chain (11 branches I think) of card and print ‘galleries’ in Devon & Cornwall. Julia and I happened to visit one of their Galleries in Dartmouth. Our opinion, is sort of, purely as consumers. They are called galleries but essentially they are shops. The stores are very clean, very white in a ‘Cornwall Coastal’ type style. All the products, mainly cards, certainly in space given, are designed and created by the Company. It is very nearly a one price concept, in that nearly all the cards were £10 for 8, which was terrific value for U.K. design and made product (apparently all done in house).

Service was excellent. And they took no cash. For some, this maybe a drawback, but from a business model it meant no cash handled, no cash on the premises and no cash to pay in the bank. As the shop manager said , ‘there was not a bank in the town to pay cash into’.

Conclusion…it is attractive, inviting, I think it’s fair to say ‘uniquely’. Certainly very different. It’s one of those shops you are sucked into and probably end spending money on stuff you never thought you needed.

Dartmouth again. Same day , but totally different ‘kettle of fish’, so to speak, using a marine like analogy. Small gallery run by husband and wife . Products sold are prints by Wife and lamps by Husband. Sounds pretty straight forward and a tad dreary, but not so. Lamp maker extraordinaire is French and very French to boot, in a good way. What he makes is amazing and quite literally unique. He refuses to make two of anything. His work does not come cheap, nor should it. Every piece of work comes with a complete set of technical drawings . Moreover, most of this happens within the shop. Even if you are not in the market for a lamp, it’s worth a visit. If you want to see creativity in its naissance thru to completion, I think this might be the only shop to find it . Plus a bit of Gallic charm.

This is a bit closer to home, or rather it’s a ten minute walk from home. I have posted about this before. This is the case of a Dutchman bringing back to life a struggling local organic grocery store. The Dutchman not only knows his stuff, he engages with both suppliers and customers, and delights in distributing his knowledge to his customer base. In a very short period of time he has established his place within the local community and provides a range of product that is different , often local (from within the South East, but some much closer such as using local bakeries) and responds to customers requests .

I lied. I said I wouldn’t mention bad retail. Well I don’t see why not. It’s quite simple, there’s a lot. But from very recent experience let’s take two , WH Smith & Boots. Have you been into one of either and wondered why they exist? I can only sum up the former as a lot of nothing, and a very tired and uninspiring nothing to boot(nothing to do with the latter). The latter often displays much but offers little, especially in some of the larger stores, where there is a bucket load of space but in reality not a lot of product. Or there are a lot of ranges but not much within each range . Some of the smaller stores are very grubby. But with most of the estate big or small, service is poor , particularly at the till. Why do some retailers do this ? Provide the least service at the place where the customer is giving them their dosh and just about to leave the store. Is there some retail moral there about ‘lasting memories ‘?

I have picked on these two but in fairness, the High Street is littered them. But with these two I am not sure what service they do provide. Boots, obviously, have the pharmacies, but independent pharmacies are often in evidence and generally look and feel more professional. With Smith’s even the airport shops, which are the really profitable part of the chain, don’t look and feel any different. In some cases they are worse, as they are in such a ‘high octane environment‘ and feel more ‘calor gas‘

More lies. I said I wasn’t writing about Ugly .

Mountain warehouse is not a bad retailer. We have, on occasion, bought from the store. Product range is good, value is reasonable and on the whole the staff are knowledgeable and helpful. The image below is why it is ugly. And it’s not because of the hanging white arm. Though it don’t look great. 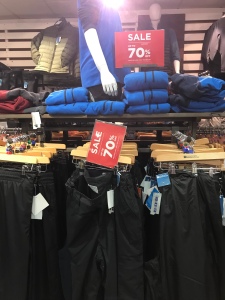 Very recently Julia purchased a pair of fleece lined trousers at £15.99 down from £59.99 in a ‘Sale’ . I wanted a pair (why? Not telling!). So I asked the manager if they had my size. He said ‘no’ but if I try this other branch (not saying where because Staff might get a grilling if this was ever read. Yes it’s possible as I am hash tagging it). So we drove the relevant fifteen miles and sure enough they did. I took them to the counter and the till showed £59.99. Naturally, I queried it. I emphasised that I understood the sign said ‘upto’ 70% off. Thus knowing it maybe anything up to that figure. But the response was ‘I am sorry, but there is nothing off these trousers. But I do understand the confusion as you are not the first to question this. However, the company does have this policy of putting the Sale signs all over the store…’

I needed the trousers (not telling) and said I would let head office know of my discontent (I have not). I think this is ugly practice(nb: my trousers came off the rack just under that horizontal red Sale upto 70% card)

Come on Mr Neale(CEO) this not a good look.

I’m not name dropping. I don’t know the guy but this is too good a retailer to let this one go.

In the immortal words of the man with name

Punk…make my day get yourself sorted if you want our money.

Yes I know he did not say that in this film . Nor did he actually use those words. But I would bet a fistful of dollars that he would have if there had been retailers like this in the Wild West. Actually , he probably wouldn’t have, he would have just shot them.

Listen up ! Check it out ! Stuff goes in cycles ! Back to the future! There is nothing new ! Bunch of clichés , none have any relevance. Well sort of not .

Within our own industry, party and fancy dress, much of today’s market was first created by retailers who used to hire out costumes for fancy dress parties. If you go back, perhaps, twenty/ twenty five years, the only fancy dress available was to hire . Then came along some innovative suppliers who discovered they could source very inexpensive alternatives for the consumer to buy and keep, from the Far East. The idea of actually buying and keeping the costume for less than the price to hire, leads us to the huge market it has become. A slight over simplification, but the principal and consequence are the same.

Within fashion, there has never been much of a tradition with hire, apart from maybe Wedding and formal evening wear clothing, certainly within the U.K. Yet, in the USA, approximately ten years ago , appeared a website called Rent the Runway, initially for the purpose of renting formal wear, since then it has become ….

Ten years later others have joined the fray. In 2018 the American State of fashion Report 2019, highlighted that the End of Ownership was one of the industry’s top 10 trends.

The lifespan of the fashion product is becoming more elastic as pre-owned, refurbished,

repair and rental business models continue to evolve. Fashion players will increasingly tap into this market

Has this trend crossed the Atlantic? You bet your ‘sweet bippy’ it has , hirestreetuk.com, ourcloset.co.uk, frontrowuk.com to list but a few.

Environmental issues are front line news and at the same time creating new and different opportunities for pretty much most businesses, if they have got any commercial sense . The thought that much ‘fashion’ wear gets worn little and is dumped into landfill is not an appealing thought. Not that I am totally convinced it is completely true , but the concept of hiring is perhaps attractive to the conscientious consumer despite the somewhat counter intuitive issue of the CO2 miles travelled by each piece of apparel as it continually goes backwards and forwards. Is that really better than the distance traveled between retailer, consumer and local dump? It also ignores some of the benefits accrued to Charities via clothing given and sold in charity shops. Oh well, subject for another day , maybe . Nonetheless the environment is undoubtedly an influencing factor.

So where does that leads us within our own market place. I am not totally sure. There are theories within our own market and throughout Europe, that the total market for fancy dress is close to a plateau. There is, undoubtedly, a move by the consumer to buy accessories that can be used again as opposed to a specific character costume that can only be used for a one ‘style’ event . So perhaps there is a perfect storm brewing . The meeting of converging energies, trends, environment and economics. If this were to be the case, I am not sure what the business model would be. Could be very ironic . One of the most notable features over the last couple of years within our industry has been the mass closure of fancy dress hire operators. There is no suggestion that there is going to be a 180 degree shift in the market but it may an indicator for retailers looking at closing their hire departments to hang on a bit .

Whatever the consequence,I don’t think it should be ignored. There will be somebody out there thinking about it. There’s a bit of a rule concerning trends (it’s only my rule) and that is if you follow them , they don’t happen, if you don’t , you look back in anger ….

So back to the opening sentence. Loads of clichés, having no meaning to anything sort of makes them no longer clichés. Well, if you take the definition as the overuse of the word or phrase to the point of losing its meaning , then you can include trends. Once over used, they cease to be trends. When everyone has forgotten about a previous trend, it can once again become a trend . A bit like ‘hire’. Something to figure out over breakfast.