In a climate of overinflated high end salaries, and obscene wealth, profit, in itself has become a ‘dirty word’. Yet no matter how philanthropic an organisation a clear margin of profit is essential even if it is only   ‘to philonthrangate’ (I’ll save you the time-it doesn’t..). 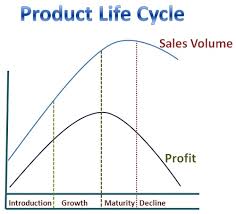 Yet we are all guilty of, at some point, chasing the ace to the bottom of the pack. The image above shows profit reducing as the demand declines.However, my issue is with declining margins before demand hits maturity. In many market places we have the strange habit that the higher the volume, the market chases the price down, even at times when the supply is not great. History constantly repeats itself with playground crazes . As the demand starts to fly, the price starts to plummet. Then supply starts to exceed demand and most players end up with stock and no profit . The trick here is always to get out just before the top (like any commodity) the general principle is do not place that last order ! Or as one (sanctimonious) customer said back in the days of the millennium

I had a great year for the millennium celebrations…

How so? When everyone else had such a terrible time….all being left with unsold stock

I didn’t buy anything!

Was the rapid retort ….

Crazes ,are unique in their behaviour patterns and perhaps not the best example. so put them to one side, I will also avoid cliches involving the words ‘profit and sanity’. Invariably those who most quote it are the biggest offenders. And we can comfortably ignore the mega brands such as Apple, as they tend to be the exception to every rule.

Take some of the U.K’s High st giants : M&S and Tesco.

In the early part of the 21st century M&S started to suffer from more agressive competition. one of their initial responses was to introduce lower priced and poorer quality product . This failed dismally, rapidly and just as importantly, continues to fail, shown in poor sales figures and lower profits. Of course there are other factors involved , but in essence they got involved in a game they could not play and still cannot. Don’t get me wrong they still make healthy profits but not to the level they had been in the past. It may seem rather arrogant, but I firmly believe they did not really understand their own brand or at very least they misunderstood and misread consumers perception. Against this backdrop competitors such as Uniglo and Zara have blossomed. Yes, agressive pricing but very acceptable margins and constant product development.

Tesco, when suddenly faced with the likes of Lidl and Aldi tried to fight back on price alone (as with other major supermarket chains) and failed to capitilise on their own USP. Only now are they all starting to reaffirm their positions but they have lost a lot of time and margin in doing so. Now I have just read that they are starting their own discount chain!

Carillion (aka Tarmac – didn’t know that !) is one that baffles me. Once again a monster that could not have known what it was doing . Pitching for government contracts at presumably very low margins in order to grow their turnover. Yet, they knew their debt levels, they knew their costs, they knew  what their immediate commitments were (the contracts they had won) and they knew virtually to the penny their cash flow situation ….and they still screwed up….commercial madness.

For small independent organisations, whose resources are far smaller , the rationale is far more understandable. Yet, unfortunately, the consequences are similar if not quicker and more final. I come across businesses in our market place who are sinking under the weight of decreasing margins plus decreasing turnover. They are relying on trying to stem the fall with price alone. They tend not to look for alternative and new product, new routes to market and additional service levels .

Major airlines such as British Airways decided to pursue the budget operators on a price to price basis. The result are lower margins and a damaged reputation , consequence of cost cutting .

And then of course there are the online traders, the ‘divers’ extraordinaire ‘. They can do that standing on their head – (diving is easier that way). Well at least those selling on the Amazon market place as the system drives the price down to lowest acceptable price by any particular seller. This is an over simplification, but as Amazon is the world’s second biggest (Walmart is still king) retailer, this has a huge impact on prices.

Within our own industry we have examples of the perfect response to the ‘dive to the bottom ‘. About seven years ago,every independent retailer (entirely uncoordinated) decided they could compete with discount operators and supermarkets at Halloween . They decided to select, stock and sell product that the consumer would not find in the multiples at margins , both cash and percentage, which provided healthy returns. Yet there appears to be a reluctance to repeat this with everyday operations. Some may say, justifiably, it ain’t that easy….no it’s not, but it has to be better than diving to the bottom.

To enjoy being in the sea you don’t have to dive under it . And if you do, you have to know what you are doing ……