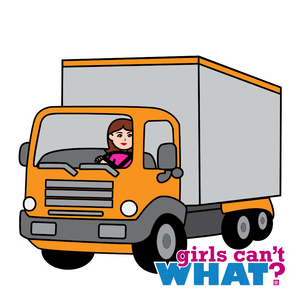 Only last week, Julia and I spent one day flying up and down the M1, as we sometimes do , checking out services station stations to make sure they were all well and good . We, both, had to use the loos, which brought us to the momentous conclusion that Female Truck drivers were not required . In the Gents there were loads of posters offering vast sums of money to join various happy bands of truckers whilst the Women’s only offered solutions to incontinence . The immediate conclusion on that was that women would not want to become truck drivers as they would be constantly looking for a Loo.

Despite the fact that neither Julia nor I know anyone who has any issue with incontinence , of either sex or age, we bow to knowledge of the great marketing research that must have been carried out by Incontinence solution makers and providers. That said their solutions are that effective then the problem should not be a barrier to entry. So what is ? There are those(men) who say that women can’t navigate . Well GPS, Sat Navs, ensure that the modern day truck driver can find even the most unnavigable farm tracks on their way to some random small town centre. So that’s not a barrier.

Three years ago women accounted for less than 2% of the truck driving community and yet I suspect given an equal opportunity there could be a considerable uptake should pay and conditions( one of the factors that are deterring men plus poor dining facilities, rubbish, showers loos, dodgy lay up areas comparing U.K. conditions vis a vis Europe ). That figure is now 1%. The stats for female commercial pilots in the UK is nearly 5% . Hardly enormous in itself but nevertheless a significant difference. So one can assume Navigation is not the problem. Said skill being somewhat more important for pilots than for truck drivers, there being no road signs in the sky .

Here’s another number I struggle with, 100,000 drivers short . That’s a huge number . It’s more than the entire U.K. British army, nearly twice as big as the Met police, more than BT or Sainsburys total work force . I know it does not mean 100,000 new trucks as it invokes multiple use, shifts etc but it must 15-20,000 or so . Where are they all going to go and on what road? I know The UK motorway system reasonably well , having travelled most if not all of it ( I can quite confidently say that there is not a single stretch of UK motorway I have not driven on)I can vouch that most of the time at 06:00 a.m there is little room for another 1,000 trucks, let alone 15,000. As to when they leave the motorway and head on to the A roads , and then the B’s , and those with dodgy sat navs the odd footpath, well that’s another story.

There is constant guff spoken about short term visas, couple of hundred squaddies, ninety year old retired truckers going back on the road, but I have heard absolutely nothing about encouraging more young females to qualify. Nor have I heard a single word about investing in the infrastructure within which the trucker works .

The haulage industry has a shortage of drivers, so the government is urging companies to encourage more women to get behind the wheel.

Apart from ‘urge’ the UK Government has done diddly squat.

The UK needs far more haulage drivers on the road to keep the UK moving, with an estimated shortfall of over 50,000 drivers in 2017. Could more women lorry drivers be the answer?

What has the haulage industry done ? Not a lot. Or if they have , its not terribly successful as the stats don’t show it and nor do the ads in the Motorway services . What has the Government done ? Even less . Sorry not quite true they have offered visas for a few months , hijacked the squaddies (great message to the public don’t panic, there is no shortage, but we will be bringing in the Army) and allowed HGV drivers to drive for a couple of days non stop . Stupid boy there’s the solution… if women don’t start queuing at the cab door allow drivers to drive 24/7 and then you may triple the number of available truck driving hours . Simples !