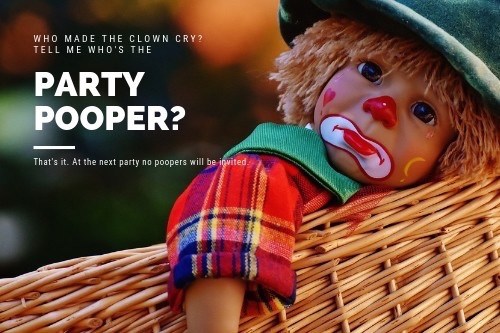 For those who may be offended by the intrigues, complexities, dark arts, hidden secrets, and just sheer audacity that go to the extremities of the Party market , should , perhaps look away. Read no further . Hide behind the latest Stephen King, some Shakespeare or maybe Jean Paul Sartre. This may not be for you .

And for those whose first language is not English …Party Pooper is someone who ruins a happy occasion .

This is a return to the roots of the Blog Title thepartyblog.org .

The party market has always been dynamic. Or rather in the last 10-15 years it has. Prior to that it would be difficult to argue . Much has happened during the pandemic ,some of which was happening already but was rapidly accelerated by the events of the last two years.

To avoid confusing myself ,I shall divide the market into 2. Decoration, including Balloons and Dress Up.

It might seem to be stating the blindingly obvious, but Covid was a game changer. Yes, of course it was , but not ,perhaps, in the way that most think. There were changes afoot in the way the UK consumer approached decorating for parties for a number of years but after the first few raw weeks of lock down in April 2020 ,this went into overdrive. Well summarised by an Observer(UK Sunday Newspaper) Journalist …

You might think Covid – no parties (except in Downing Street), no proms, no fun at all – would have popped the balloon bubble. Quite the contrary. As Kasiri says: “People were still pregnant, they were still having birthdays, baby showers… although they didn’t invite guests, they still wanted a backdrop so people could attend on Zoom or pop into the garden.” Elari pivoted to contactless deliveries of bike-sized backdrops, as a balloon arrangement became the consolation prize; a cheer-up for a cancelled celebration rather than the inflatable icing on the cake.

I believe that, initially, this was very much a UK trend. It was not confined to Balloons as the consumer decided that if they could not go out for their celebration they would make very best of it at home and as it was very adult centric , the results were often quite stunning . Emma Beddington puts it quite succinctly….

Animal sculptures are Old Balloon, along with the traditional packet of primary-coloured ovals, effortfully inflated and tied by apprehensive parents, pre-party, and just sort of tossed on the floor, perhaps rubbing one against a jumper to perform the never-not-funny static hair trick on a nearby child or tying a couple to the door knocker with string. Also Old Balloon: a single, or small bunch of foil “birthday girl”, “18 today” or L-plate helium-filled ones, dragged round streets and into bars, bobbing chaotically in the wake of a group of lairy revellers, eventually abandoned in a club queue, floating up, up and away.

Today it is more about design , creativity and impact.

Now Party Decoration , at home or somewhere outside the home, has taken on a different meaning. This provides a challenge for Retailers, whether online or on Street. It is essential to keep a very close eye on trends . It is no longer enough to rely on your suppliers to tell what are their top best selling items as today’s best sellers are very unlikely to be tomorrow’s . Although it pains me to say this, but what the Kardashians do today , millions try tomorrow.

This has created an retail environment of opportunity. Not to say there will not be challenges . However, the days of filling your store with product, open the doors and let the punters pore in are over. Though in reality, it was never quite like that anyway but the consumer will expect more in terms of the retail experience. They will want to see new innovations , ideas, product and retail colleagues who can help them achieve the party atmosphere they want to create . It will no longer be sufficient to refresh your product ranges once a year (some retailers don’t even do that ) . Speak with your suppliers, talk with your customers, look at social media These are opportunities that the supermarket or discount chains cannot access and are very difficult for websites of any format difficult to gain any traction.

As a footnote , here is a fairly eyepopping figure from the Observer, although a source is not declared. Nevertheless it is fairly impressive…..

The costume and dress up market has been undergoing change for, probably, the last five or six years. It is widely considered that the market (throughout most of Europe ) in costumes has plateaued and possibly is in a slight decline. Throughout the pandemic it was virtually none existent . The opportunity to wear fancy dress simply did not exist . No hospitality, no parties, no travel, no sporting events, no festivals. All, of which are major dress up opportunities. But, Covid aside, there was a move away from buying what is basically an one off purchase . That is to say if you buy a Roman Gladiator costume, you only really wear it, if you are going to be a Roman Gladiator.

During the pandemic there was a uptick in accessorization ie the use of wigs, beards, glasses, anything to enhance the atmosphere with the temporary trend of Zoom Parties. But again it just nudged on an existing trend whereby using accessories , the consumer found the ability to adapt product they bought for one occasion they could use for another . Moreover, it once again it encouraged creativity as a daft hat or wig could be used with your every day clothes or other items. Pre-Covid this was a trend very evident in recent Halloween themes. Wear a Pirates hat and beard at same time as wearing Devils Wings and fake blood . This will continue and develop. Initially online and High Street Party retailers did not like this as they were losing a single sale of £30-£40 plus and have to make several sales in accessories to make up the lost revenue. Then they started to realise, although more work was involved the margins were much better and there was less competition from the Supermarkets, and discounters as they are unable to offer the extensive accessory ranges you need to make this work.

So who are the Party Poopers? No, not the party loving UK Prime Minister. Covid, disrupted supply chains , Russian Invaders, fuel costs and inflation. Each and everyone is interlinked in some way or another. Covid is continuing as a major problem primarily due to the way the Chinese Government is handling the problem in China. The locking down of major conurbations fundamentally mean that many factories of all shapes and sizes and not operating. Compounded by the Chinese Government limiting energy supplies to certain manufacturing areas. Rampant world wide inflation will put a damper on consumer spending. So it is not a good look and these disruptions are here for some time . However, I am reasonably optimistic. The Party market often does well when there are major economic pressures. The Retail price points are such that whilst the consumer may think twice about having a lavish celebration in a third party environment they will spend on ensuring that celebration at home is made all that bit more special . Lockdowns highlighted this pattern and I believe it has created an awareness with the consumer that will persist and grow. But the retailers, of all types ( and suppliers) will have to work for it.

To conclude with a riposte to all Party Poopers …..

“Nobody can be uncheered with a balloon.”